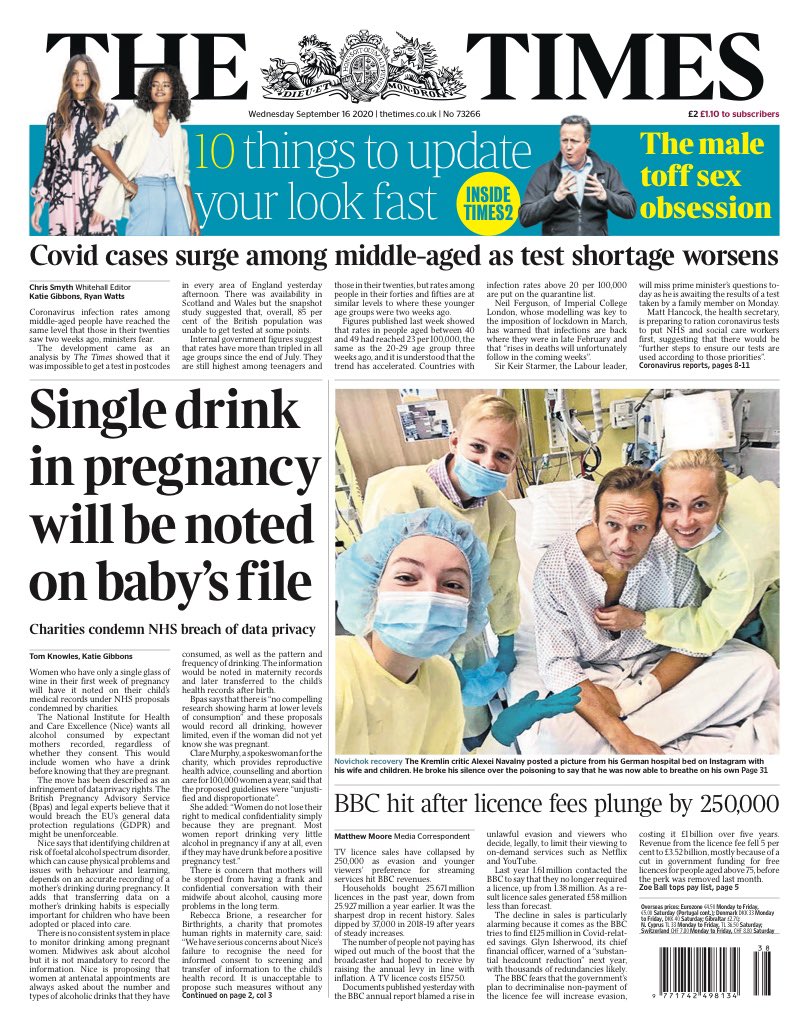 The Times reports that coronavirus infection rates amid middle-aged people are now at the same level as people in their 20s. But its top story is on plans by the NHS to record all alcoholic drinks consumed by pregnant women. Charities including the British Pregnancy Advisory Service say it could infringe data privacy rights. But the official NHS advisory body believes it could help identify babies at risk of foetal alcohol spectrum disorder. 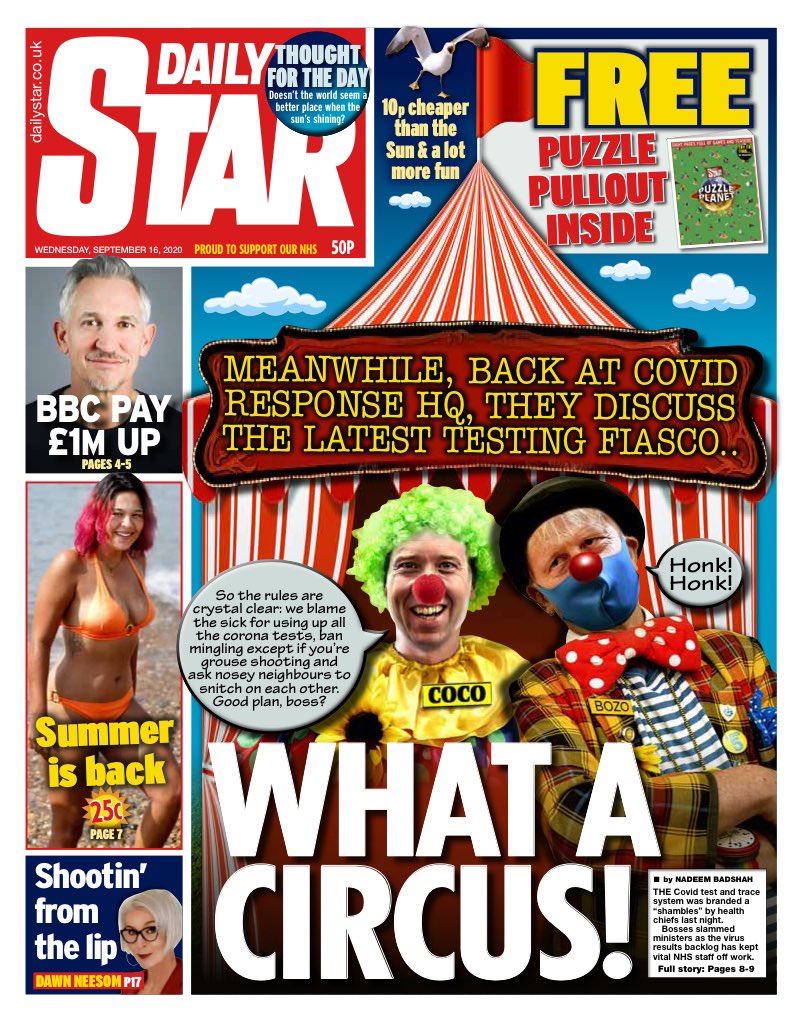 The Daily Star depicts Mr Hancock and Prime Minister Boris Johnson as clowns as it describes the testing system as a “circus”. It reports on comments by health chiefs who have said the backlog in testing has led to NHS workers being forced to miss work. Using a speech bubble from Mr Hancock’s mouth, the paper mocks the government’s latest response, suggesting ministers are blaming the sick for using up all the tests. 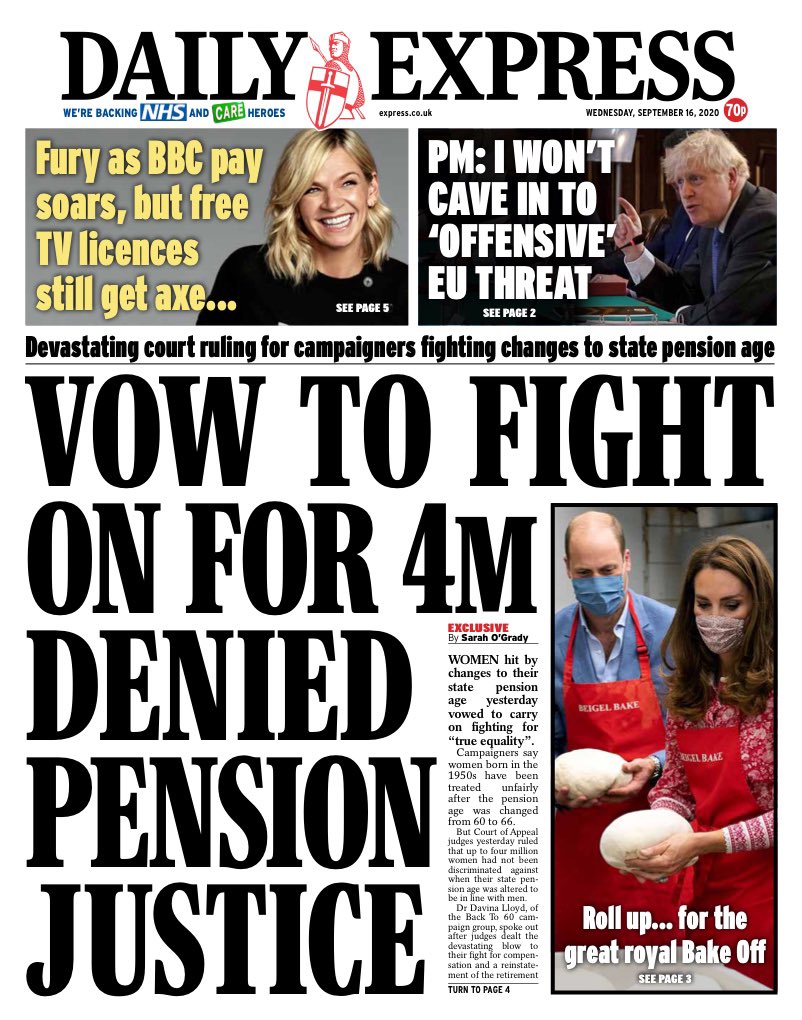 The Daily Express’ top story is on Tuesday’s court ruling that saw senior judges dismiss an appeal from two women affected by changes to the state pension age. The women – who are backed by a campaign representing millions of women who were affected when the state pension age was upped from 60 to 66 – have vowed to carry on fighting, the paper says. It calls the ruling a “devastating blow to their fight for compensation”. 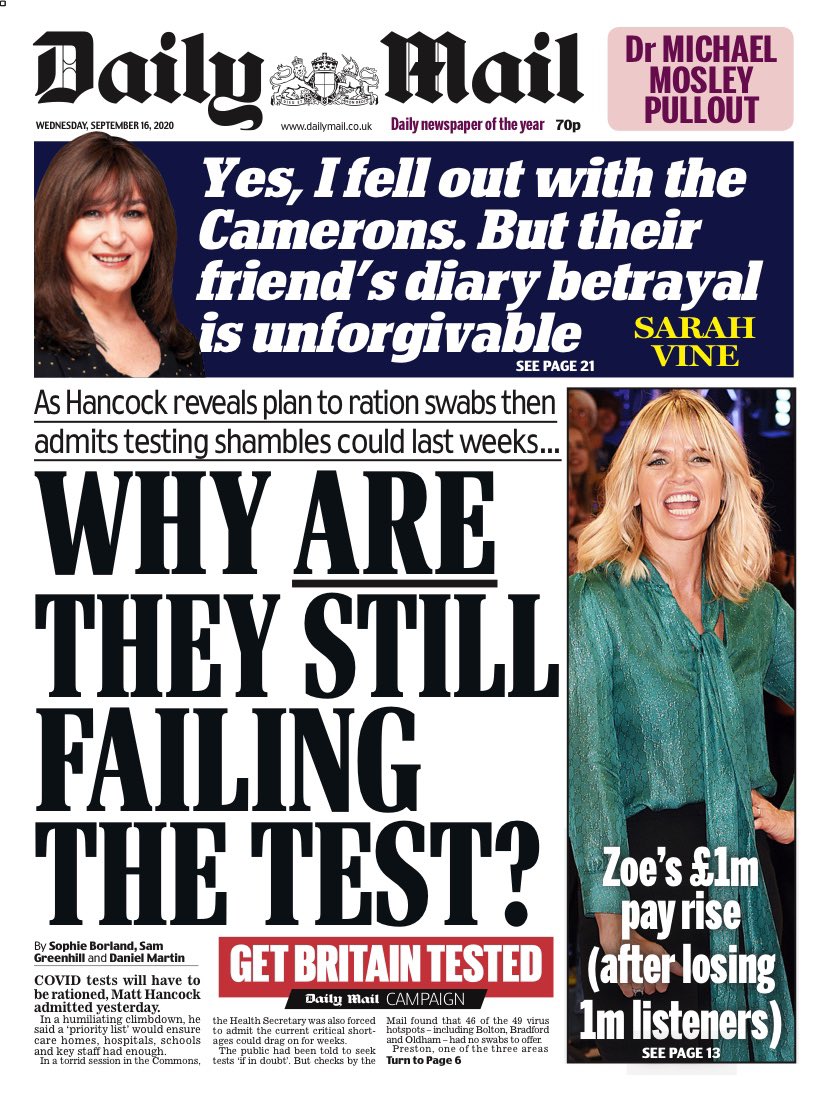 The Daily Mail calls the testing situation a “shambles”, as it promotes its own campaign called “Get Britain Tested”. The paper reports on Mr Hancock’s comments in Parliament, saying he admitted that tests would need to be rationed with care homes, hospitals, schools and key staff given priority. It was a “humiliating climbdown” for the health secretary, the paper says. 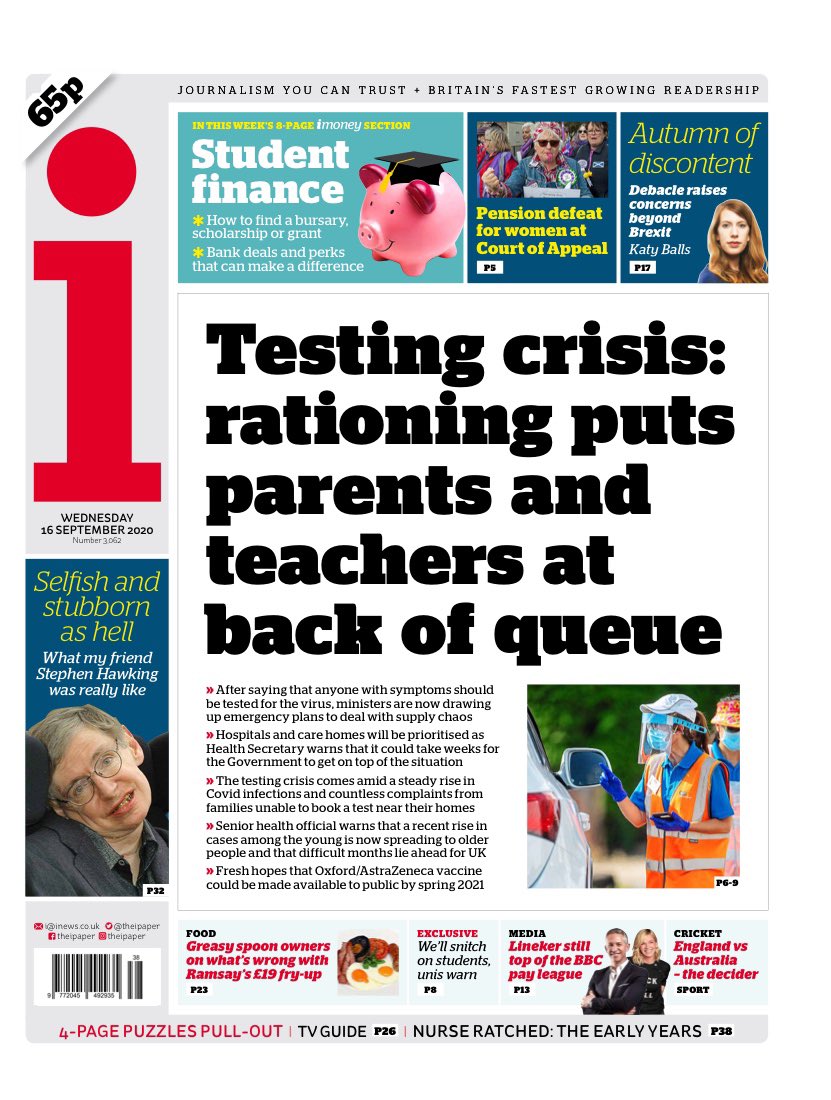 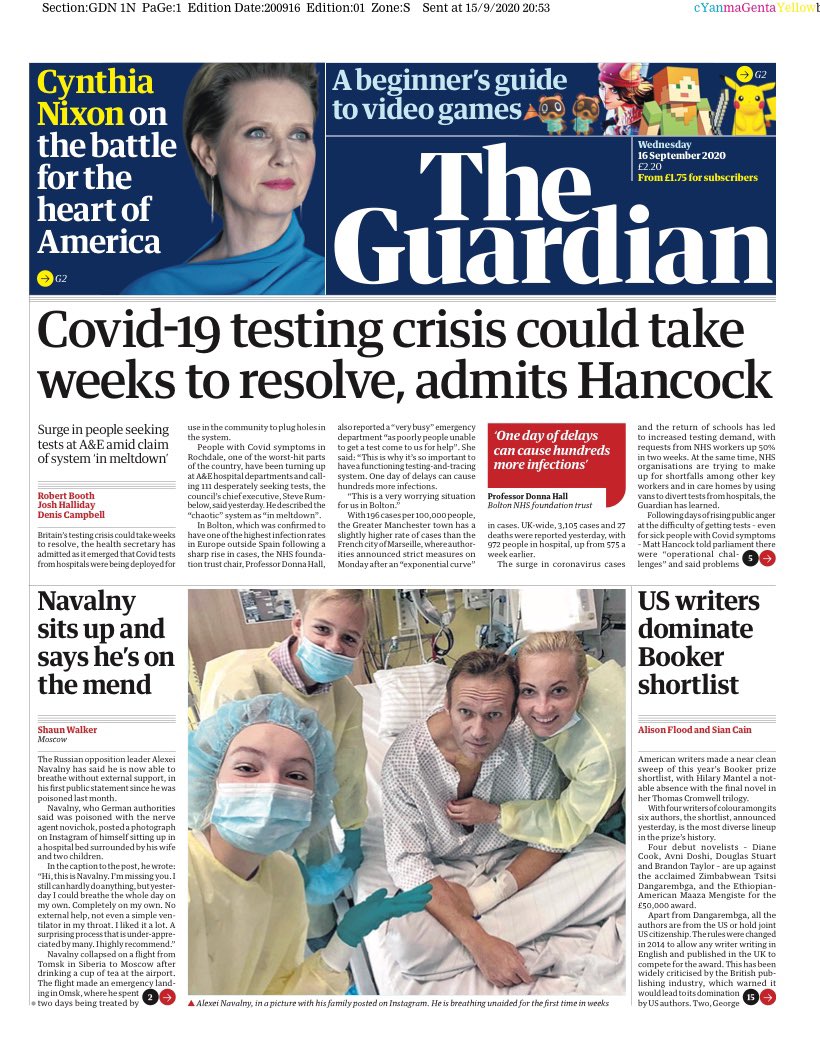 The latest on the UK’s coronavirus testing system features on many newspaper front pages, including the Guardian. It reports comments by Health Secretary Matt Hancock that the issues could take weeks to resolve. The paper says people have been turning up to A&E to try to get tests, and quotes an NHS trust chairwoman in virus hotspot Bolton as saying: “One day of delays can cause hundreds more infections.” 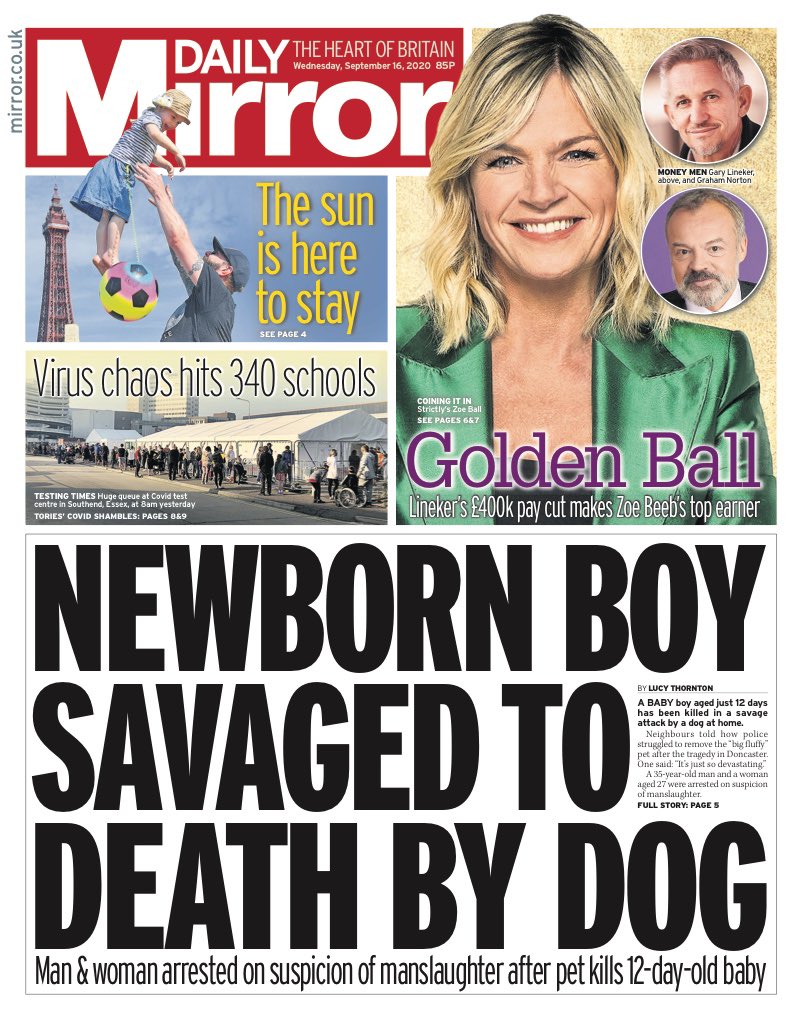 On its front page the Daily Mirror reports the sad news of the death of a 12-day-old baby boy who was killed by a dog. Two people have been arrested following the attack in Doncaster on Sunday. 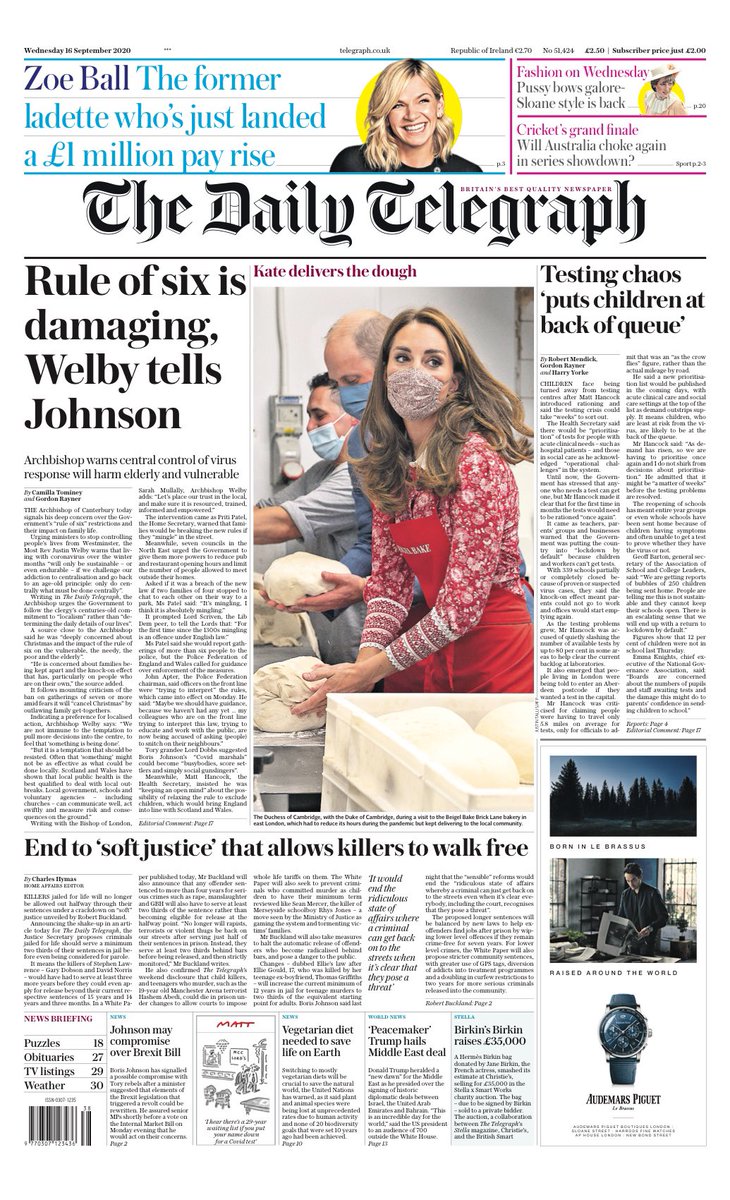 The leader of the Church of England, the Archbishop of Canterbury Justin Welby, has written an article in the Daily Telegraph calling on the government to let local public health teams make lockdown decisions, rather than making rules centrally. The paper quotes a source close to the archbishop who says he is “deeply concerned” about the impact of the “rule of six” banning gatherings of more than six – especially on the vulnerable, poor and elderly. 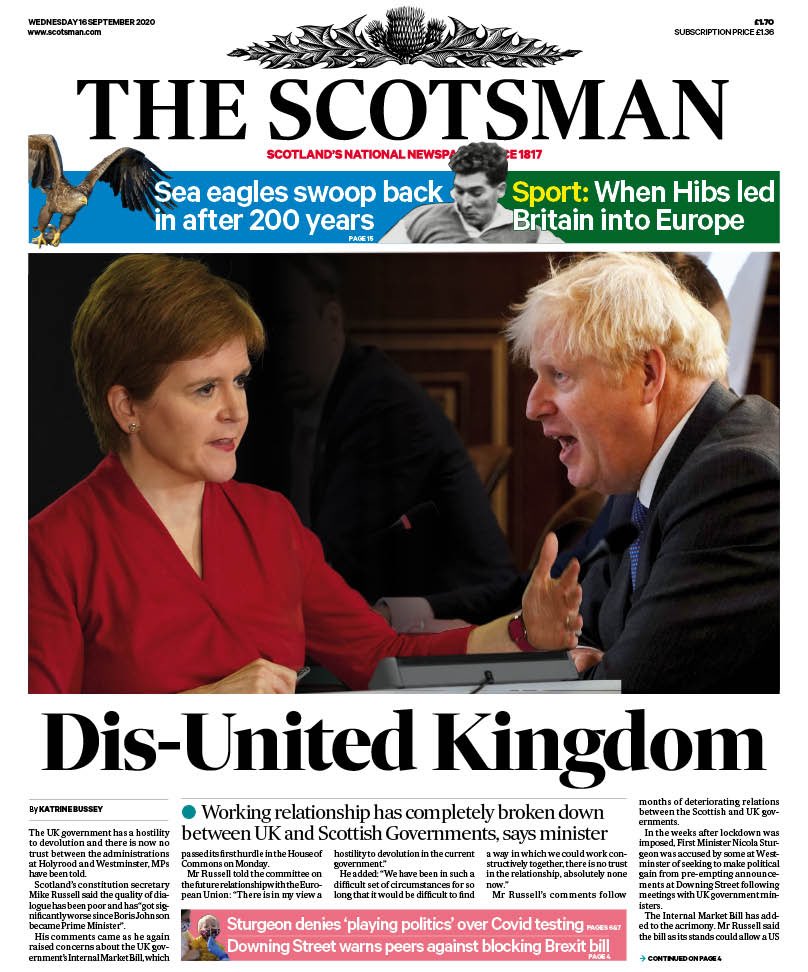 Pictures of two testing centres in Cambridge and Twickenham appearing to be empty are on the front of the Metro. The paper reports that computer glitches meant some people were unable to book appointments online leaving the testing centres “deserted”. The paper says some people have had to exploit “technical loopholes” and entering postcodes hundreds of miles away to book slots at their nearest centres. 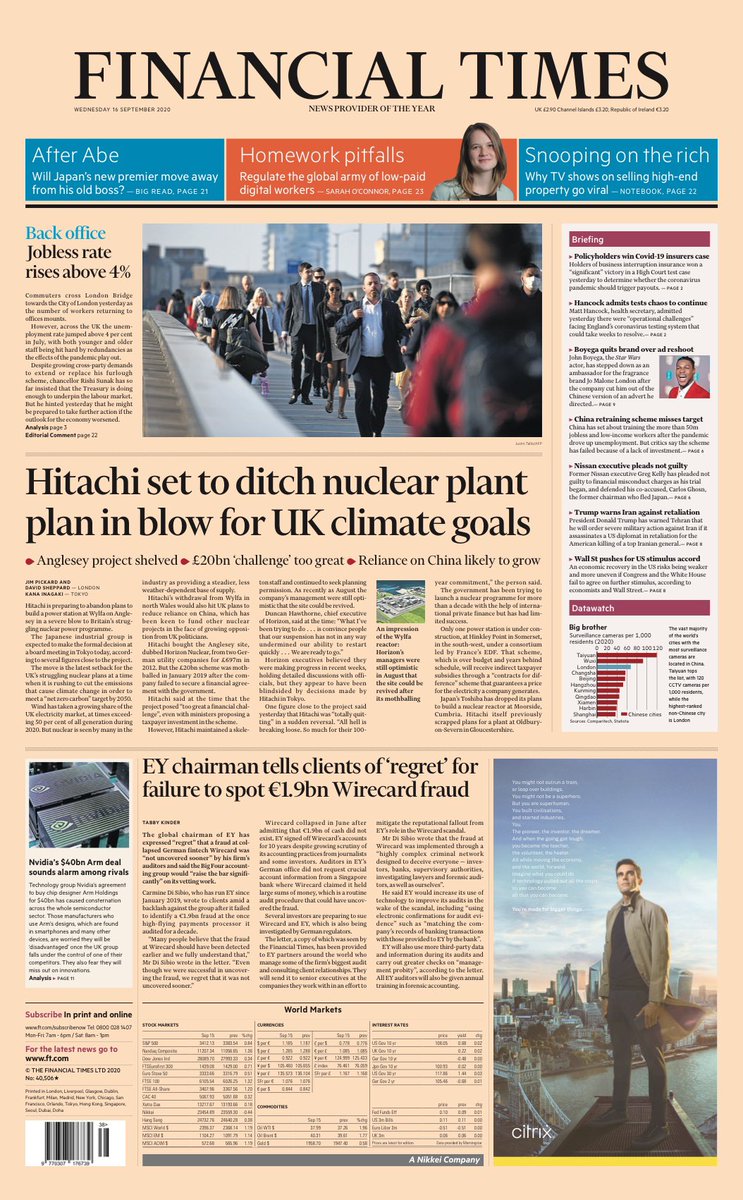 The Financial Times leads on the news that Hitachi is preparing to pull out of plans to build a nuclear power plant on Anglesey in Wales. The paper calls it a “severe blow to Britain’s struggling nuclear power programme” at a time when the UK is trying to cut carbon emissions to reach its “net zero” target by 2050. Hitachi’s exit could also hit UK plans to reduce reliance on China, the paper says. 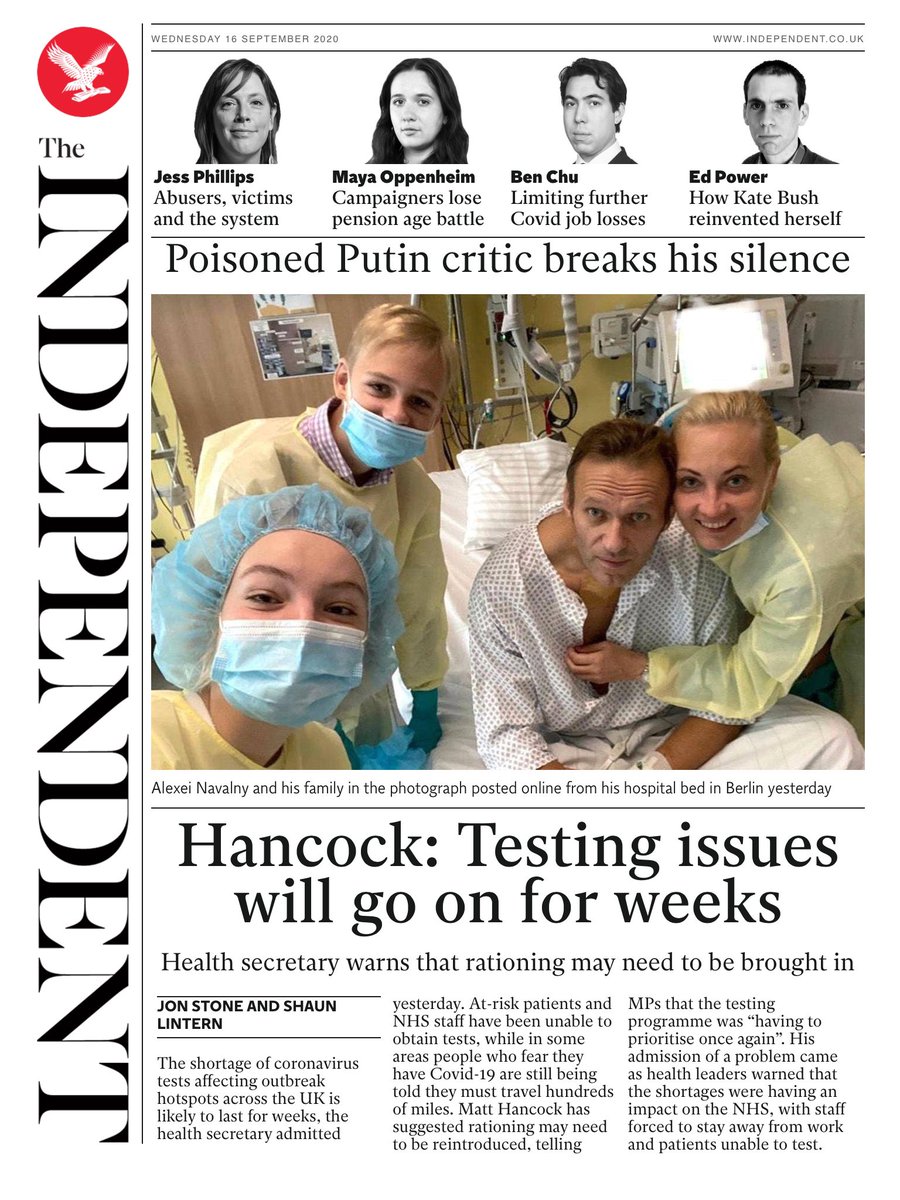 The Independent reports on Health Secretary Matt Hancock’s commons appearance, where he admitted it could take a number of weeks to solve the ongoing coronavirus testing issues.